The Museum of the Waxhaws is home to permanent exhibits that tell the story of our region’s rich history and culture.

Beginning with our Native American roots, the displays in the museum’s permanent exhibit room trace the history of our region from the time when the Waxhaw Indians hunted and camped along the creek banks, through the mid-1700s, when several Scots-Irish families settled in this place they called the ‘Garden of the Waxhaws,’ through the American Revolution, Civil War, and into the early 1900s as the historic buildings and homes of downtown Waxhaw were constructed around the railway.

Our museum proudly serves as a memorial to President Andrew Jackson, our nation’s seventh president. While it is undetermined whether Jackson was born in North or South Carolina, it is certain that he was born near Waxhaw in close proximity to the present-day border between these states on March 15, 1767. 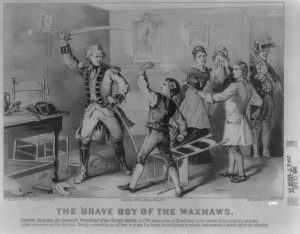 Our exhibits on Jackson focus on his early years, during the time he spent in the Waxhaws. Several famous military units were formed in the region during the Civil War, including the Waxhaw Jackson Guards of the 26th NC.

The war came to the region in 1865 when Confederate cavalry under General Joseph Wheeler defended the area against General Sherman’s advance.

Themes displayed in the main exhibit room include Native Americans and Early Exploration, Life in a Scotch-Irish Cabin, the Revolutionary War, the Age of Jackson, Social History and Agriculture, the War Between the States, Early Churches of the Waxhaws, and the Later Years: 1865-1900. The exhibits include maps, photographs, paintings, tools, weapons, tent displays, an 1814 Conestoga wagon, an 1890 backboard wagon, a cotton gin, and many other artifacts.