When you visit the museum, the Secrest Homestead will make you feel as if you have stepped back in time to visit a thriving nineteenth-century family residence, complete with heritage garden and several outbuildings. The Secrest log house was probably built during the 1840s as Union County was formed. In 1997, the cabin was donated to the museum and moved from its original site on the Secrest family’s land in Monroe, NC. 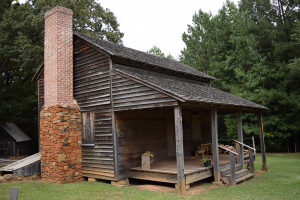 Several other structures make up the entire homestead exhibit. Visit our homestead and step back in time, exploring and realizing how life would have been for a family in this region as early as the 1700’s. See the architectural styling and construction fashioned by our forefathers. Watch as a blacksmith forges tools and utensils as they would have been made. Talk to a gardener about the types of herbs and vegetables that would have been grown by an early American farmer, and the techniques used for successful gardening in that era. Learn about the role that domestic animals had on a homestead and how they were tended and nurtured. Enjoy the sights and sounds of the beautiful natural surroundings at the Secrest Homestead on our museum campus.