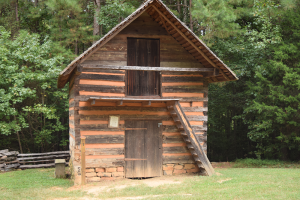 This wonderful example of a mid-1800s smokehouse once sat on property owned by the Nesbit family from the Prospect Community of Monroe, NC.

John and Sarah Nesbit immigrated to Pennsylvania from Duns, Scotland, in 1731. Their oldest son, Alexander, was born at sea during their journey. They later traveled down the Great Wagon Road to the Waxhaw Territory in 1753. Alexander received two adjoining land grants in the lower part of Anson County, on Cain Creek, which have remained in the Nesbit family ever since.

The family believes it was Hugh Coffey Nesbit (1812 – 1873) who built this smokehouse, sometime between 1840 and 1850. Hugh’s son Alexander Montgomery Nesbit, a Civil War veteran, changed the spelling of the family name.

The smokehouse was donated to the Museum by William Ben Nesbit and was moved here on August 6, 2006. Restorations were completed in March 2007 and included a new roof, new stairs and landing for upper level, replacement of three rotted logs, and chinking and daubing.

Smokehouses were an important part of farms and plantations. Every homestead had one, which was a testament to a family’s self-sufficiency. A full smokehouse symbolized a family’s ability to provide. Families raised their own hogs and cattle, and did the slaughtering themselves, usually in winter. The meat was salted to preserve it by rubbing the meat with raw salt and then placing it in a wooden box or trough for up to six weeks. The meat was only smoked for about a week and the purpose of the smoking was mainly to add flavor. Different woods were used for smoking to achieve different flavors. After smoking, the meat would be hung from hooks or log poles, or laid on shelves for storing until it was needed.

The interior of a smokehouse was very dark. The only light came from the open door or through small vent holes. The floors were dirt with a shallow pit in the center for the fire. In southern communities, mainly hog meat was smoked, as it was the meat favored by most families.